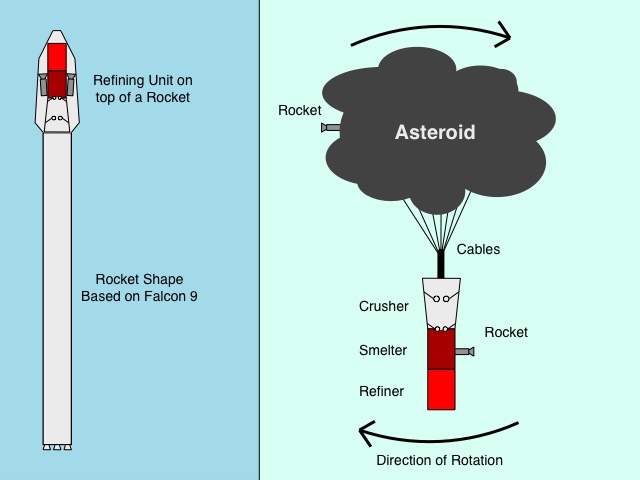 A mining device that combines a crusher, smelter, and other refining equipment would be attached to a large asteroid via a cable. The two would spin around one another in order to generate artificial gravity. Materials to be refined would be loaded in the top of the unit and come out the bottom as usable metal.

Two companies have announced plans to investigate asteroid mining. While the basics of identifying likely mining prospects with telescopes and deep space probes is straight forward enough, what the companies have not disclosed is a method for refining discovered ore. I believe that by adapting smelting and refining technology we currently use on Earth for a micro-g environment, we can set the stage for building a space-based economy and colonization of our solar system.

All current refining technology is based on gravity

The biggest downside of smelting metal in space is all our current technologies and knowhow are based on gravity. In general, to refine metal, you melt ore, and the useful metal floats in the liquid somewhere near the middle and the slag/waste floats to the top or sinks to the bottom. To use these processes with ore from asteroids, you could bring materials back to Earth or the Moon. In the former you waste energy bringing back useless material and risk hitting our home with a meteor. In the latter, you also waste energy moving useless material and in moving in and out of the Moon’s gravity well. The best way to utilize current methods in space is to instead create artificial gravity near the asteroid you want to mine.

By tethering and rotating around an asteroid, we can create artificial gravity

The mining unit in the above picture would combine all the traditional steps of crushing, smelting and refining ore into one unit designed to operate in a low (but not 0 or micro) gravity environment. The unit would be launched atop a rocket and sent to a likely asteroid. The unit would be anchored to a much larger, more solid and probably un-mineable asteroid with a long cable. Small rocket engines would then set the unit and the big asteroid rotating around one another generating artificial gravity via centrifugal force. Smaller rocks, either asteroids in their own right or material collected off of larger ones by scoops/mines/explosives/etc, would be loaded into the top of the unit, crushed, smelted and refined on their way through the unit. The materials from this operation will provide the metal to build bigger, better versions of the unit. Excess can be sent back to Earth and sold on the market or used to build other things in space. 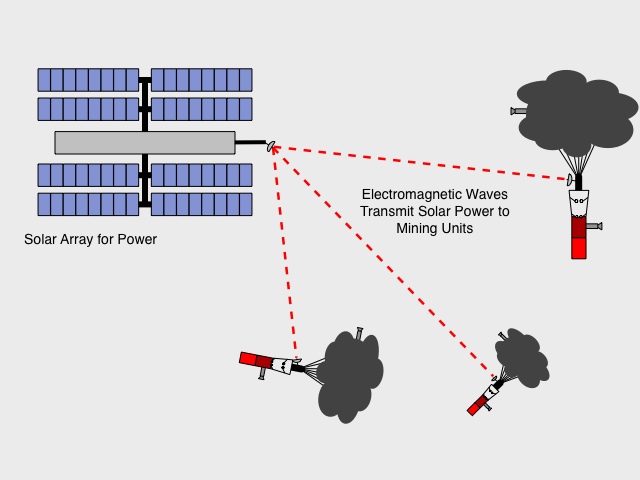 Solar power stations will provide energy. The initial mining station will provide the materials to build more and bigger versions of itself.

The easiest way to power this whole endeavor is with solar power. A power station would send energy to the mining units via electromagnetic waves. As more mining units are brought online, the power station can be expanded to provide energy for multiple units. The long-term goal is to create a self-sufficient mining colony that makes money by providing raw materials for Earth and space-based colonies.