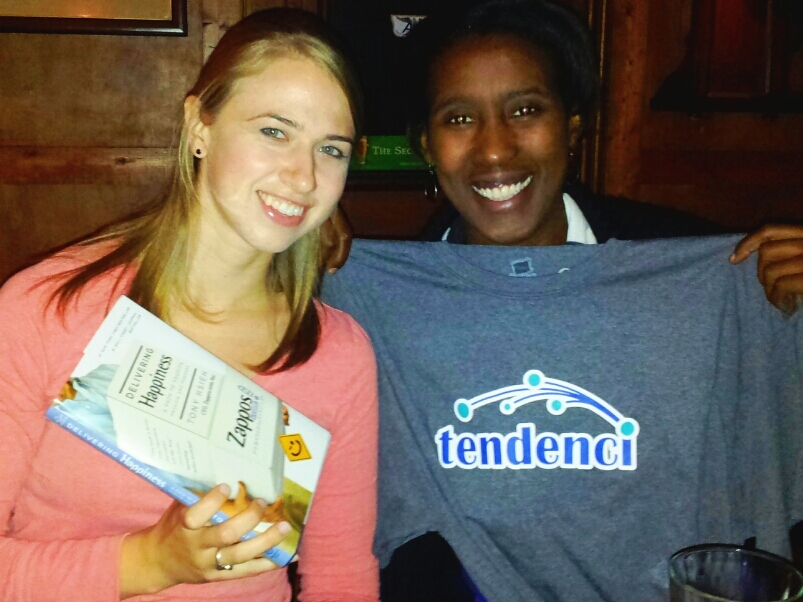 Elaine and Mia won a copy of Delivering Happiness by Tony Hsieh and a Tendenci t-shirt, respectively, at Net^2’s announcement event for Open Houston.

The people from NetSquared and Code for America have launched a new initiative to help make Houston a better place to live and work. Called Open Houston, it aims to support public sector innovation in the city by building useful community apps on top of the city’s data and by leveraging public support to build high-tech solutions to the city’s problems.

The initiative was launched last Tuesday at the Stag’s Head Pug. Jeff Reichman from January Advisors gave a wicked talk on volunteering in the city and getting involved with Open Houston. I met several interesting people. Here are 3 things I learned about that I think you should most definitely check out.

Get Involved with Open Houston

Town Hall on Turning the Library into Collaborative Maker Spaces

The Houston Central Library is hosting a town hall to discuss creating collaborative and maker spaces in underutilized library space.

If you have been to the library over the past 10 years, you may have noticed some pretty radical transformations. It started with the obsolescence of the card catalogue and its replacement by computers. Now, the books themselves may be going out because every free square foot of table space in many libraries is dominated by computers that allow the public to surf the internet.

The Houston Library is aware of these changes and seeks to get ahead of the curve. They are looking for input on how to turn various unused/underutilized spaces in our libraries into collaborative workspaces and/or makerspaces. Come to the town hall and listen to others voice their opinion or voice your own. Let’s make the city better.

Sign Up for the Town Hall at the Houston Central Library

HOUmanitarian.net is the Source for Humanitarian Efforts in Houston

HOUmanitarian.net helps Houstonians learn about humanitarian efforts going on in the city.

From organizations helping the city cope with natural disasters, to medical professionals journeying overseas to provide relief missions in other countries, to the local civic clubs seeking to aid Houstonians, HOUmanitarian.net seeks to provide a platform for these groups to promote themselves. The website has links on where to volunteer, upcoming aid projects and news on humanitarian efforts in and around Houston.

The Prison Entrepreneurship Program seeks to give inmates the skills to find jobs and start their own businesses after they are released.

Recidivism is an on-going struggle in communities across the nation. Prisoners recently released from jail have incredible difficulty finding new jobs and often must return to crime in order to make ends meet. Many end up locked in a cycle of being released only to commit a new crime, be arrested and returned to jail.

The Prison Entrepreneurship Project seeks to break this cycle by connecting prisoners with local professionals. The prisoners learn skills to help them both find jobs and start new businesses. Not only does this program reduce recidivism among released inmates, it also helps the city save money by reducing the prison population and make money by creating productive, tax paying citizens.

Connect with the Prison Entrepreneurship Program