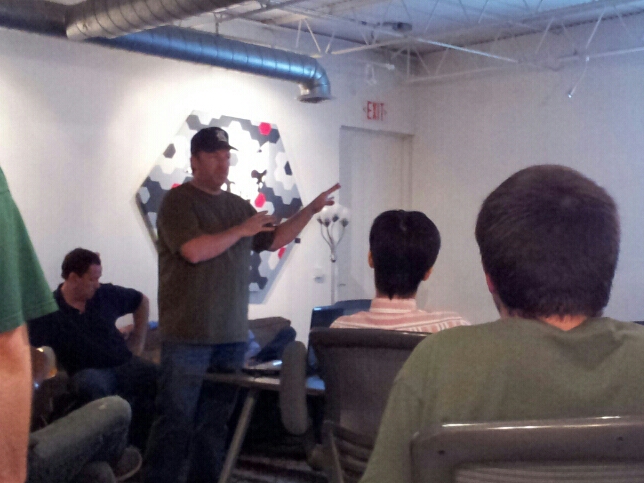 After open coworking at Start Houston yesterday, I stuck around for the Houston Unity Developers Group. The guys from Qualcomm dropped by (bearing delicious pizza from Bombay Pizza) and showed off some demos of their augmented reality SDK, Vuforia, in action.

Vuforia Uses Your Phone to Create an Augmented 3D Environment

At its most basic level, Vuforia can scan an image from a magazine, business card or other source and then direct the user to a website, video, or add 3d images to the source. For example, using their phone’s camera, a person would scan a page from the LEGO quarterly catalogue or from Maxim magazine with the appropriate app. The app then directs the user to a website to purchase the item on the page, shows the user a video about the item, or adds a 3d augmented reality animation to the image on the user’s phone. For the latter, when you scan the page of the firehouse set in the LEGO catalogue, a 3d model firehouse complete with a flying helicopter appears.

The neatest apps were the games. For the Pacific Rim game (which was kind of boring after a few rounds, BTW), the game would scan the surface in front of you and use it as the setting for the game. The play was in the style of Street Fighter but the difference was, the two characters would battle on your coffee table, page of the magazine you had open, or any other flat surface you choose to scan. Further, if you moved the phone, the characters and the setting would stay in the same location on the surface and the image on the phone would rotate around them, maintaining the illusion of augmented reality.

Talk Android put together a great demo video of the SDK in action.

Limitations of the Technology

For kids and games, the demos seemed excellent. A child is probably willing to scan a page in a magazine in order to see bonus content. The same is true for games. It is cool that I can scan my kitchen table and then my phone turns it into the setting for a game. However, for advertising, I have trouble believing that magazine readers are going to 1) purchase the magazine 2) download the specific app to access the content and then 3) view the content on their phone after scanning the appropriate image. Overall, it is too app specific and requires too many steps for advertising.

I cannot wait to see this kind of tech integrated with VR goggles, provided, of course, that I can turn it off when I am walking down the street.